Argentios, keeper of this journal, warms himself beside an invisible magic fire.

Morning Has Broken, Please Can You Fix It? 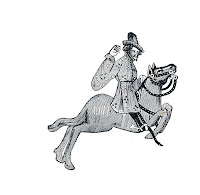 The sun rises early on the Feast of the Dormition, even in Cappadocia. Even on a covenant full of possibly heretical magicians and wizards.

So the day dawns in heat and humidity, for this summer has been hot and wet, far more than is usual in this part of Asia Minor.

The covenant of Mystikae Eikona begins to awaken, though not as early as the monastic houses a few miles to north and south. In fact their bells tolling the death and resurrection of the Most Holy Theotokos which is commemorated on this day are what awaken those whose duties require them to be up early.

The handful of covenfolk about at this hour are not at all bothered by the falcon which stoops from the sky over the fairy chimneys and other rock formations of the covenant, but they do turn and watch expectantly as the handsome avian wheels around one of the single-capped chimneys and then lands on a small balcony near its top before fluttering through a door leading inward. A few moments later a fresh-faced young man in a simple homespun robe steps out onto the balcony and stands watching those below.

This central area of the covenant is triangular, bounded on the southeast by a long, low stone building that houses servants quarters and the kitchen; on the northeast by the large, multicapped fairy chimney which contains the covenant great hall, library and other such “public rooms”, and to the west by three singlecapped chimneys (from one of which the young man watches).

Heavy brush fills most of the gaps to the east, but to the west haphazardly placed fair chimneys lead to the western wall of the small valley, and a Byzantine-style carved façade which clearly opens into caves within the cliff.

Only the space between the east end of the building and the east end of the “great hall” fairy chimney is unobstructed, but two armed and armored men are visible there, one on a wooden platform raised about 10 feet above the ground, the other standing beside the clearly marked pathway at its foot.

Around the base of the “falcon tower” appears an old man. He is of medium height and balding, with gray hair around the crown of his head, a light tuft of the same on his chin, and long—very long—gray mustaches. At his side trots a beautiful Dalmatian hound. The old man does not seem to notice the younger man gazing down from the balcony, but the dog looks up and says “Good morning, Master Peregrine, did you have a pleasant outing this morning?”

Master Peregrine laughs aloud and replies “Indeed I did, good Afosiomenos, though not as pleasant as the hunt we enjoyed two days past.”

Afosiomenos, which is Greek for “Spot”, snorts. “A wasted effort, Master Peregrine, for Master Metatarzes would not let either of us enjoy that feast of quail which we flushed, citing the strictures of the Dormition Fast. A waste of good meat, and at any event *I* am a hound and not a Christian.”

Again Master Peregrine laughs. “Say that not so loudly that the monks hear you, oh hound. But today the fast is ended and you shall have a feast indeed, if I know your Master at all in spite of my brief time here. But look you, tell Metatarzes that as I passed over the Zelve road, I spied two horsemen riding fast from the direction of Cavuscin and as they wear the colors of Yusuf Muharrem Beg of Nyssa, I daresay they are coming here.”

The hound looks toward the receding back of his Master, then back at the young man above. He gives a low “wuff!” like a clearing of the throat and then says in a voice more reedy and petulant than before, “Then as the youngest and newest of the covenant’s magi I suggest you attire yourself in something other than a blanket to cover your nakedness after indulging your heartbeast, and get you to the entry tower to greet out visitors. Meanwhile I shall have breakfast. Afosiomenos shall call the others.”

The Dalmatian turns and runs off toward the other fairy chimneys, but not before giving Master Peregrine a sly wink.

Each of the magi except Peregrine is called to his door by Afosiomenos and asked to come as soon as possible to the central court.

Metatarzes message to you is thus:

“A visit from envoys of Muharrem Beg is not to be taken lightly. What he may want I do not know, but for him to send men on one of the twelve great feasts of the Christian church is highly irregular. That they ride swiftly and not at the usual leisurely pace of the Seljuk Rum is also irregular. Pray that it is more a social visit than one requiring our…especial skills. Come quickly. Iakovos, for God’s sake try to be presentable! Humbertus, do NOT come smelling of horses! Nor Domazhir, should you smell of the forge and sweat—I know you were working all night! And…do you know the olive trees are bearing rather early this summer? It must be all the rain we’ve had…”

Feast of the Dormition -- the Eastern Orthodox name for what the Western Church calls The Assumption. The Orthodox do not hold the bodily assumption of the Virgin Mary into heaven after her death to be a dogmatic matter but rather one of personal opinion--that is, a Christian may believe it or not. What *is* required is a belief in Her death and resurrection by Her Son, the Christ. It is preceded by a fast from August 1st.

Yusuf Muharrem Beg - the Beg is a provincial governor of the Seljuk Turks. Yusuf Muharrem being the current officeholder in the city of Nyssa.

Posted by pravoslavniye at 10:26 PM

Domazhir will, of course, bathe and dress himself in his finest robes (dark, rich velvets, heavily embroidered), as much to honour himself as to honour our visitors. He will manage this as speedily as necessary, without undue haste, arriving in an unhurried manner to greet these emissaries.

Humbert received the news with a nod and murmured, "Deo gratia." A quick splash of water around the face and neck and a change from his heavy working clothes into lighter garments of wrapped silk in the Saracen style sufficed to get the smell of horse as much into the background as it was ever likely to be. Then it was off to the meeting place.

Peregrine quickly changes into his “dress” robes (light colored with finely embroidered feather motif from head to toe, designed to reflect his heartbeast’s coloration) and makes his way to where the gate guards are located. Judging by how far out the riders are, he will either wait for them by the gate (if it seems like they will arrive momentarily), or climb up onto the platform until the riders come into sight then climb and/or jump down to the above-mentioned waiting place.