Argentios, keeper of this journal, warms himself beside an invisible magic fire.

Excerpt from a tractatus regarding the Covenant of Mystikae Eikona

Mystikae Eikona is a covenant in Cappadocia of Asia Minor. It is located in rough ground south of the Seljuk city of Avanos, and east of the subterranean town of Goreme. The closest village is Zelve, about a mile as the crow flies, but 5 on foot.

Mystikae Eikona is 75 years old and has not developed as swiftly as other similarly aged covenants have done, primarily because it is not within the bounds of a Tribunal. It is north of the Levant Tribunal and east of the Theban Tribunal, in Seljuk Rum.

While the covenant does send representatives, by invitation, to the two Tribunals, the magi of Mystikae Eikona have never come down in favor of one or the other. They seem happy enough to continue in their relative isolation from the politics of the two Tribunals and the Order, though they are somewhat willing to offer aid and support when needed. Whether this situation is allowed to continue much longer remains to be seen.

Physically the covenant is located in a minor valley to the southeast of Pasabag, and is housed in a series of stone geological forms known by the quaint name of "fairy chimneys", as well as caves in the valley wall. For those Merinita and others with an interest in things fae, there is no evidence that “fairy chimneys” actually have anything to do with the fae. Many do, however, have a distinct magical aura.

At the creation of the covenant, then known as Veneficus Specus (the reason for the change of name is explained below), three founding magi chose a three-capped form that had a large ground level hall and a number of upper rooms for use of themselves and their servants. Each of the three caps became a sanctum for the magi.

The almost immediate arrival of three more like-minded magi resulted in a temporary use of nearby single-cap forms which eventually, because of their slight distance from the immediate area of the “main hall” became the preferred locations for sanctum and laboratory space.

Through the years the covenant has expanded to now fill a number of the fairy chimneys as well as the extensive cave complex in the western wall of the gorge. It is not known exactly how far the caves extend. There has been only intermittent exploration due to labor shortages, but at least one of the magi, a self-professed authority, believes they may reach to Goreme and beyond. 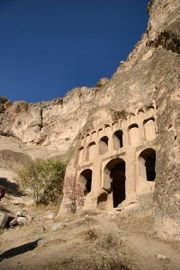 As of August 1220, the population of magi at Mystikae Eikona is eight: two of the original founders, Metatarzes filius Argentios ex Bonisagus, and Albanus filius Flammaria ex Flambeau, and two of the magi who arrived shortly after the founding and who are also accorded status as founders, namely Iakovos filius Zoraya ex Bonisagus and Annais filia Guillemaque ex Criamon, and three relatively youthful magi anywhere from one to two decades past their Gauntlet who either were apprenticed to one of the founders or came from another covenant. There is also a true newcomer from House Bjornaer.

The other founders having entered Final Twilight or having met their fate in an unfortunate misunderstanding with Kaykhusraw, the Seljuk Sultan who seized Konya from the Crusaders in 1205. The matter was quietly handled with support from House Jerbiton (one of whose members died at the hands of sultanate guards) and the Sultans have been reasonably quiescent toward the covenant since that time.

Mystikae Eikona supports itself through limited agriculture and a small tin mine. Tin being rare in Asia Minor, but useful for many things, the income is respectable if not noteworthy.

In the last decade, a junior magus and a custos of the covenant have established a farm for the raising of horses—an appropriate occupation perhaps, in this land whose name derives from the Persian for “land of beautiful horses”. The farm is actually about three miles from the main covenant site, for obvious reasons.

The covenant also recently has invested in a pottery works at Avanos.

It is not unlikely that the magi use their particular talents to enhance their mining, horseflesh, and pottery. They are not wealthy but they can meet their needs without undue hardship.

The grog population includes specialists in mining and equine husbandry. If they continue their pursuit of pottery, they will likely want a specialist in that field too.

Among the more interesting features of the covenant:

--all founding magi have individual fairy chimneys as their sanctums; the younger magi either have sanctums in the cave complex or in one of the larger multi-capped fairy chimneys. 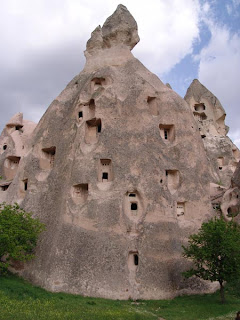 --in 1204 as Constantinople was being over-run by Crusaders, the founders approached the magi of Sinews of Knowledge in the Greater Alps, from which one of their number had come. The result of conversations between the two covenants was the creation of a Hermes Portal between them. This has proven a godsend for swift message-bearing by the Redcaps between the West and the Levant, as well as provided an outlet both directions for support of Mystikae Eikona and covenants even further to the east. No one knows exactly what the terms for creation were, or exactly why the magi of Mystikae Eikona felt they needed such a link. Many magi of the Greater Alps and Rhine Tribunals however express a certain wistful appreciation for its existence, and have been known to "vacation", however briefly, in the relative warmth of Asia Minor during long cold northern winters. Mystikae Eikona maintains two good quality "apartments" for visiting magi.

--As the covenant expanded, a chamber was discovered in the cave system that had clearly been a chapel of some sort. It had a distinct divine aura, though rather weak. Within the chamber, ikonography covered the walls, the colors still vibrant after many years closed and sealed. The eastern wall has an altar table before it, and on that wall is a large bas-relief ikon of an unknown saint. What is unique is that here, within a divine aura, is an ikon with a powerful magic aura. Why the divine aura has not faded to nothing ness is unknown. But the hall itself is a favored place among the magi and their companions for quietude and contemplation. A story told of the space is that a particularly violent and contentious meeting of the covenant council adjourned to the chapel and was so calmed and eased that they were able to come to a swift resolution of their difficulty. Why the strange juxtaposition, and who the saint may be (and why the ikon bears such a strong magic aura) are questions that have not ever been answered.

The covenant maintains reasonably friendly relations with the mundanes in the area. It has a regular contract for tin with the Seljuk Sultan Kaykaus (son of Kaykhusraw) in Konya to the west, and is believed to have begun its equine project at the urging of a Rum noble from Kayseri. The locals are respectful but wary about the magi, though the grogs are welcomed in Zelve, Goreme and Avanos with no problems.

Mystikae Eikona is a fair example of a covenant. It has some minor issues that will need to be dealt with in the near future, most pressing the question of Tribunal affiliation--it is not likely the Order will allow continued "autocephaly" from either Tribunal in the region--but on the whole it is stable and productive.
Posted by pravoslavniye at 11:05 AM

No, I don't know why Tarcheniotes, my former apprentice, chose to join House Mercere instead of continuing with House Bonisagus. But he had many friends in Mercere, always loved traveling, and never was at a loss for words.

Now my other apprentice, Metatarzes (I do like the Greeks, though I'm from Provence myself), he's made a REAL name for himself in the House!